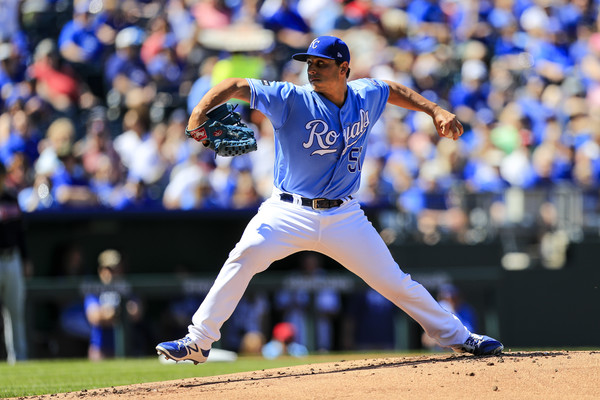 The result of the Yankees having so many days off through the first six weeks of the season starts now, as they will not be off again until June 5. That’s twenty games in a row without a day off; luckily, they will not have to travel all that far in that stretch with this week’s trips to Kansas City and Tampa Bay representing the furthest journeys. Given the heavy workload handled by the bullpen this weekend, though, it seems all but certain that the team’s depth and Joe Girardi‘s hand will be tested as soon as this evening.

The Last Time They Met

The Yankees visited Kansas City for a three-game series to close out last August, winning two along the way. They were outscored by one run in the series as a whole, with both of their victories coming by one run, and taking extra innings to sort out. Some other interesting bits:

Check out Katie’s Yankeemetrics post for more details about this series.

Former Yankee Ian Kennedy is on the disabled list with a hamstring strain, and is scheduled to throw a bullpen session this week. There is no set return date as of yet, but he isn’t expected to be out too long (he could be in-line to face the Yankees when these teams meet again, in fact). Middle reliever Scott Alexander is out, as well.

Their Story So Far

The Royals are last in the majors in runs scored by a comfortable margin, and are scoring just 3.2 runs per game. They are currently 8-18 when they allow two runs or more, and that’s with them having won six of their last seven games overall. It doesn’t help that Alex Gordon and Alcides Escobar both sport an OPS under .500, and it seems less than ideal that one of those two has batted first in …